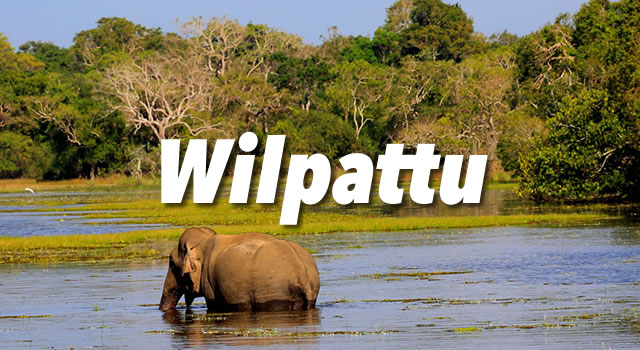 Wilpattu National Park
Situated 176 km. north of Colombo, Wilpattu is approximately 1,908 sq .km. in extent. It has a dense jungle cover which makes it a more exciting park where animals have to be tracked. There are numerous delightful little lakes - known as villus - and the leopard and sloth bear are the specialty rather than elephants.

Wasgamuwa National Park
Situated approximately 200 km away from Colombo, the Wasgamuwa National Park lies within the Polonnaruwa and Matale Districts and have the Mahaweli River and Amban River as its eastern and western boundaries. Tropical intermediate dry mixed evergreen forest dominates its environment.

Other livings are 143 species of bird including the Red Faced Malkoha, Ceylon Jungle Fowl, Lesser Adjutant, Yellow Fronted Barbet, Ceylon Spur Fowl and Ceylon Frogmouth. Plus there are 8 species of amphibians reported of living in this park which include the endangered skink, lizards like the Red Lipped Lizard and Earless Lizard. In addition, 17 species of fish and 50 species of butterflies are found here.