Hikkaduwa, Unawatuna and Mirissa are considered the best snorkeling
and scuba diving locations. All have fully licensed diving centres, where you have the choice of experienced UDI and PADI instructors. Diving on Sri Lanka's South Coast is suitable for beginners and advanced divers alike.

When is Diving Season on Sri Lanka' South Coast?

You can enjoy the perfect diving from mid October to the end of April.
During the rest of the year the Indian Ocean on Sri Lanka' South Coast is sometimes too rough and the underwater visibility is limited. 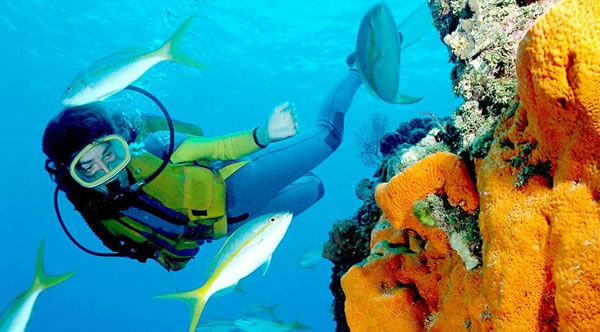 Hikkaduwa was once known for the most beautiful coral reefs and an abundance of tropical fish. The fishes are still there, but most of the coral reefs are destroyed. Still a good place to learn scuba diving or to go snorkelling, though. Not to to forget that some of the Sri Lanka's best ship wrecks can be dived from here. Namely a rocky formation called "Deep Rock", "Kiralagala", and the "Conch Ship Wreck".

Unawatuna is the main destination, when it comes to scuba diving on the South Coast. The Napoleon and the Galapiteala Reef offers the opportunity for multi level dives where you encounter all types of fish - from the Bat Fish, Napoleon Wrasse, Golden Moray Eels and many smaller colourful coral fishes.
For wreck diving is the "Rangoon Wreck” only 30 minutes boat from Unawatuna Beach by diving boat. The 100-year-old British steamer sits there in the clear water with its masts intact. Highly recommended! Close to the "Rangoon Wreck” you'll find the "Tango Wreck", another part of Sri Lanka's fascinating underwater archeology. The “Tango” shipwreck is another underwater museum piece in the same area as “The Rangoon”.
Snorkeling in Unawatuna is almost perfect with its many shallow spots. There are also man Snorkelling Tours on smaller diving boats on offer. Mainly to "Jungle Bay" a shallow and beautiful beach just outside Unawatuna and to the Galle Harbour.

Mirissa is another good beach for scuba divers with any skill level. From novice to advanced diver. Many of the dive centres in Mirissa offer professional diving courses with certification. Including equipment rental and tank refills. One of the highlights here is the diving along whales, dolphins and turtles.
Both ends of the Mirissa beach are the most recommended starting points for snorkelling. You will need to be a bit more carful when snorkelling in Mirissa than at other beaches, due to surfers coming in above you and around Parrot Rock you'll find strong currents and rip tides.

Compared to the south and the east, diving on the western coastal belt of Sri Lanka is kind of average. Good for beginners and if combined with other activities like water skiing, a nice addition to your holiday in Sri Lanka. The exception is Kalpitiya, a marine sanctuary with a diversity of habitats ranging from bar reefs, flat coastal plains, saltpans, mangroves swamps, salt marshes and vast sand dune beaches.

Scuba Diving and Snorkeling at the protected Kalpitiya coral reef is the perfect underwater experience. You can find a wide range of small fish and eels. Large schools of fish tend to pass through and you might see the occasional octopus and Fimbriated Moray. Not to mention the sperm whales and dolphins during the season. The underwater currents in the Indian Ocean off Kalpitiya are not strong and the underwater temperature is on average 24° Celsius. Wetsuits might be prevent bruising from the corals.
For snorkelling in Kalpitiya we recommend the Thalawil Beach with the colonial St. Anne’s church in the background. A beautiful coral reef to snorkel alongside larger rock and coral formations.