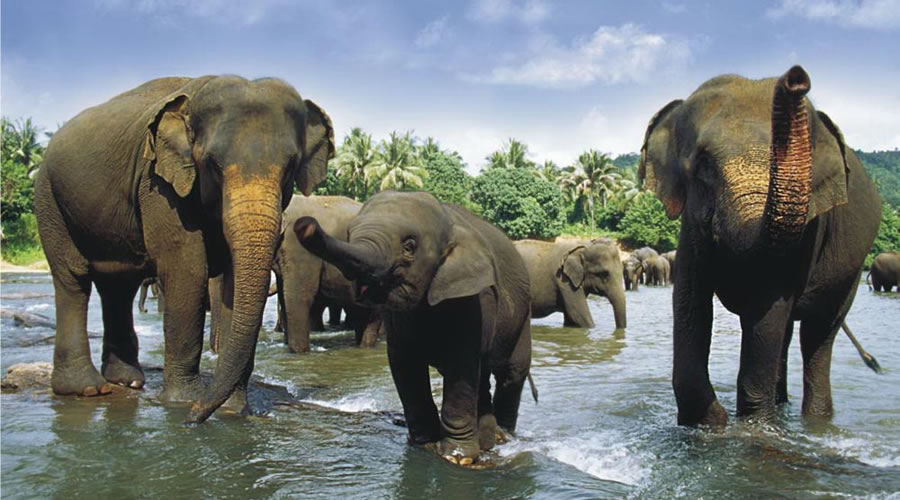 Sri Lanka is one of the best places in Asia for seeing wildlife. The island’s isolation from the mainland, the heavy rainfall of the two diagonally blowing monsoons, and the country’s wide range of altitudes have given Sri Lanka a variation in climate and biodiversity normally found only across an entire continent.

And Sri Lanka is proud of its natural bounty. For over 2,000 years, swathes of land have been preserved as sanctuaries by Sri Lankan royalty – Mihintale, the world’s first reserve, was created here in the third century BC. Now there are 100 areas of protected land in the country, and this is the pick of the bunch...

Yala West (Ruhuna) National Park
Best for: Leopards – the park hosts around 30, some of which are fairly bold for this normally secretive cat.
Drive time from Colombo: Six hours

Located in the south-east of Sri Lanka, Yala is a beautiful area of lowland dry scrub sitting on a long stretch of coastline, punctuated by rocky outcrops. It is the premier national park of Sri Lanka, and arguably one of the best for mammals in Asia.

The top draw is the Sri Lankan leopard, a sub-species endemic to the country; in certain areas of the park, the average leopard density is as high as one cat to every square kilometre. During the fruiting of the palu trees in June and July, sloth bears are often observed.

The combination of freshwater, marine, scrub and woodland areas ensures a high diversity of birds. Indeed, the park hosts 220 different types, and serious twitchers have recorded 100 species in a single day.

Ardent birdwatchers should also visit Bundala National Park (an hour away) or the Palatupana Salt Pans (ten minutes away), especially for migrant shorebirds.

Uda Walawe National Park
Best for: Wild elephants – there are around 500 in the park.
Drive time from Colombo: Four hours

Created to protect the watershed of the enormous Uda Walawe Reservoir, this park, just south of the central mountains, has extensive stretches of grassland as well as scrub jungle and riverine forest. It’s the best in the continent for observing Asian elephants in the wild; in fact elephant sightings are virtually guaranteed, even if you only go on one game drive.

Otherwise, the park is poor for viewing mammals, but birdwatchers will enjoy the presence of fabulously named raptors such as the changeable hawk eagle, serpent eagle and grey-headed fish eagle.

Wasgomuwa is in the dry lowlands of the North Central Province, 40km north of the richly bio-diverse Knuckles Massif. All of the big game is found in Wasgomuwa, but bear and leopard are pretty elusive. However, it is very good for observing family units of elephants, still relatively wild with unpredictable temperaments.

Sinharaja Rainforest Reserve
Best for: Birds – the mixed flocks here have been subject to the longest study of the phenomenon.
Drive time: Five hours

Situated in the wet south-west of the island, this is the country’s premier rainforest. The canopy towers up to 45m in places and more than half of the trees here are found nowhere else in the world. Mixed-species bird flocks are a key feature of Sinharaja. Around six endemic birds may make up one flock, including species such as red-faced malkoha, green-billed coucal and Sri Lankan blue magpie. Animals present include leopard, purple-faced langur, barking deer and three types of squirrel.

These two parks are within half an hour’s drive of each other in the North Central Province, sited around two large reservoirs. Scrub jungle surrounds the lakes and contains many mammals, but game viewing is generally poor – except for the wonderful seasonal congregation of elephants. The ‘gathering’ takes place in Minneriya during September and October, when over 300 elephants come together on the bed of Minneriya Lake, which dries out to create a lush grassland.

Towering up in the central highlands, Horton Plains is the highest plateau on the island. The cloud forests here are rich in endemic plants and animals that have adapted to the cooler climes (night time temperatures can fall below zero).

Birds such as the Sri Lankan whistling thrush and Sri Lankan bush warbler are best seen here. The dwarf lizard, found only in the montane zone, has evolved the ability to give birth to live young in order to avoid the problems of laying in such egg-chilling temperatures.

Wilpattu, Sri Lanka’s largest wildlife park, is situated in the dry lowlands of the island’s north-west and comprises a series of lakes – or villus – with varying degrees of freshness or salinity.

The park reopened in 2003 after nearly 15 years of closure. Over time, the wildlife should recover to its former abundance and become more habituated to vehicles – at the moment the animals are wary of any human presence.

Wilpattu was famous for its leopards, and big-cat enthusiasts are hoping this reputation will return. The park’s fauna is similar to Yala, but visitors also have a chance of seeing the muntjac or barking deer.