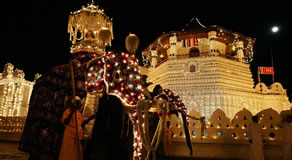 Sri Lanka has many festivals and national holidays, including poya days which are celebrated monthly on full moon days.
During holidays it is customary to engage in pilgrimages to distant ancient temples. Visiting the sixteen main temples (Solosmasthana Vandanava ) that enshrine sacred relics or hallowed by the Buddha is popular.

Kandy Esala Perahera
Held in August.
The Kandy Perahera is the most important, spectacular and magnificent pageant, with 12 days of torch-bearers, whip-crackers, dancers, drummers and elephants parading the streets.
Climaxes in great procession honoring the Sacred Tooth Relic of Kandy.

Duruthu Perahera
Celebrated in January, Raja Maha Vihara Temple, 8km out of Colombo.
Second only to the Kandy Perahera in spectacle.
Commemorates the first visit of the Buddha to Sri Lanka.

Sinhalese & Tamil New Year
Celebrated somewhere between the 13th and 15th April depending on the completion of the solar circuit.
Celebrated mainly by visiting relatives but also with elephant races, coconut games and pillow fights in rural villages.

Vesak
Celebrated on the day of the full moon in May.
Most important Buddhist festival, which commemorates the birth, death and enlightenment of the Buddha (almost a Christmas, Easter and Whitsun combined!).

Poson
Celebrated on the day of the full moon in June, mainly in Mihintale.
Festival to celebrate when the reigning king of Sri Lanka first met Mahinda, who brought Buddhism from India.

Vel
Celebrated in July/August, in Colombo.
Hindu festival to venerate the trident of Skanda, the god of war.
Tip: don't miss the ceremonial chariot of Skanda hauled between two temples.

Kataragama
Celebrated in July/August, in Kataragama. More of a pilgrimage than a festival. Devotees put themselves through the whole gamut of ritual masochism.