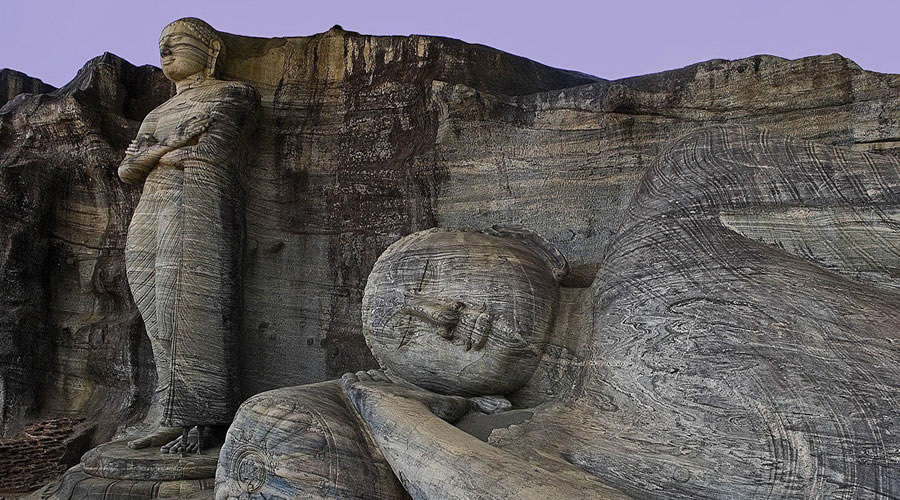 According to the Sinhalese tradition, Buddhism took root in Sri Lanka with the arrival of Aśoka's son Mahinda and his six companions. Sent as missionaries by the Mauryan emperor, these travelers converted King Devānampiya and many of the nobility. Under King Tissa, the Mahāvihāra monastery was built, an institution that was to become the center of Sinhalese orthodoxy.

After Tissa's death (c. 207 BC) Sri Lanka fell into the hands of the South Indians until the time of Dutthagāmani (101–77 BC), a descendant of Tissa, who overthrew King Elāra. During this time, as a reaction to the threat posed by the South Indians, Buddhism and Sri Lankan political formations became closely intertwined.

Again, it was probably because of this danger that the Pāli canon was first written down under King Vattagāmani Abhaya in the 1st century BC. This king also built the Abhayagiri monastery, the main center of the various Mahāyāna movements in Sri Lanka. These heterodox tendencies were openly supported by King Mahāsena (AD 276–303). Under Mahāsena's son, Śrī Meghavanna, the “Tooth of the Buddha” was brought to Abhayagiri and made the national palladium.

During the 1st millennium AD in Sri Lanka, the ancient Theravāda tradition coexisted with various forms of Hinduism, Mahāyāna Buddhism, and Buddhist Tantrism. Beginning in the 10th century—as Buddhism was declining in India—Sri Lanka became a major locus of a Theravāda Buddhist revival. As a result of this revival, Sri Lanka became a Theravāda kingdom, with a sangha that was unified under Theravāda auspices and a monarch who legitimated his rule in Theravāda terms. The new Theravāda tradition that was established spread from Sri Lanka into Southeast Asia, where it exerted a powerful influence.

Under King Kittisiri Rājasiha (1747–81) the ordination lineage was once again renewed, this time by monks recruited from Thailand.

The monastic community in Sri Lanka is now divided into three major bodies: (1) the Siam Nikaya, founded in the 18th century, a conservative and wealthy sect that admits only members of the Goyigama, the highest Sinhalese caste, (2) the Amarapura sect, founded in the 19th century, which has opened its ranks to members of lower castes, and (3) the reformed splinter group from the Siam Nikaya called the Ramanya sect. Among the laity several reform groups have been established. Among these the Sarvodaya community headed by A.T. Ariyaratne is especially important. This group has established religious, economic, and social development programs that have had a significant impact on Sinhalese village life.