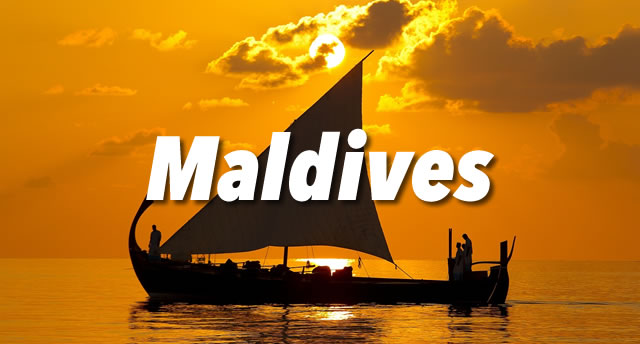 Sun, sand and sea, the thousand ‘Robinson Crusoe’ islands of the Maldives, massive lagoons with different depths and infinite shades of blue and turquoise, dazzling underwater coral gardens; a perfect natural combination for the ideal tropical holiday destination.
However there is more to the Maldives than just that.

A string of pearls scattered over the deep blue Indian Ocean - The first glimpse you get of this fascinating atoll- formation confirms two unique aspects of the Republic of Maldives. Not only does it consist of the most beautiful tropical islands, but 99% of its 90.000 km² is covered by the sea. 1190 islands are spread over 26 atolls, ringlike coral formations enclosing a lagoon, which gives the Maldives its unique paradise-like appearance. They stretch for about 820 km from North to South, 130 km at the widest point and do not exceed a length of 4.5 miles or an altitude of 6 feet above sea level. No more than 200 islands are inhabited, the rest includes the 87 tourist resorts and uninhabited islands, some of which are used for drying fish or other agricultural activities.

The capital Malé, the seat of government and the centre of trade, commerce, business, health and education, is located in the middle of the atoll chain, a small island buzzing with the sounds and activities of about 75.000 people which is about one third of the population.

The origins of the Maldivian people are shrouded in mystery. The First settlers may well have been from Maldives and Southern India. Some say Aryans, who sailed in their reed boats from Lothal in the Indus Valley about 4,000 years ago, probably followed them. Archeological evidence suggests the existence Hinduism and Buddhism before the country embraced Islam in 1153 A.D.Not surprisingly, the faces of today’s Maldivian display the features of various faces that inhabit the lands around the Indian Ocean shipping and maritime routes, the Maldives has long been a melting pot for African, Arab and South East Asian mariners.

The population of Maldives has increased rapidly during the last few decades. However with a population of nearly 270,000 the country still remains one of the smallest independent nations in Asia.

About a quarter of the population is resident in Male’ the capital. Outside Male’ the largest population are in Hithadhoo in Addu Atoll, Fuamulah and Kulhudhufushi in Haa Dhaalu Atoll with 9,640, 7243 and 6,354 respectively. The rest is dispersed sparsely in the rest of the 200 inhabited islands.

The Maldives has a tropical climate with warm temperatures year round and a great deal of sunshine. The warm tropical climate results in relatively minor variations in daily temperature throughout the year. The hottest month on average is April and the coolest, December. The weather is determined largely by the monsoons.

There is a significant variation in the monthly rainfall levels. February is the driest with January to April being relatively dry, May and October records the highest average monthly rainfall. The southwest monsoon or hulhangu from May to September is the wet season. Rough seas and strong winds are common during this period. The northeast monsoon iruvai falls between December to April. This is a period of clear skies, lower humidity and very little rain. The Maldives is in the equatorial belt and therefore severe storms and cyclones are extremely rare events. However the country is affected whenever cyclones form in the Bay of Bengal or the Arabian Sea. The spiraling clouds of the weather systems appear over the Maldives causing spells of rain.

To look for other selected Sri Lanka hotels or guesthouses click here...
For more travel and background information on Sri Lanka, read our Sri Lanka Guide and the travel tips, helping you to make the most out of your holiday in Sri Lanka.